Today I’m excited to announce that one of my former students, Harley Mazuk, has his FIRST NOVEL coming out in January from Driven Press! Harley’s stories have been published in Ellery Queen Mystery Magazine and elsewhere. He’s been working damn hard at this craft and the book will be a dynamite read. Join me in congratulating him today as the book’s cover is revealed:

White with Fish, Red with Murder 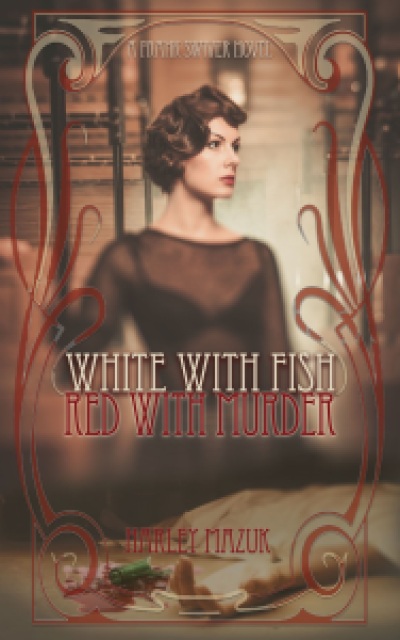 Fans of Harley’s writing will already recognize private dick Frank Swiver from several short stories published in Ellery Queen Mystery Magazine.  In this, his first full-length story, Frank is caught between his two great loves—wine and women—while on the clock to solve a case.
San Francisco, 1948.
Frank Swiver is a down and out private eye with a taste for wine and women, not necessarily in that order. Frank readily accepts an unexpected job offer from well-known wine connoisseur General Lloyd F. Thursby to find the murderer of his very good friend, Rusty O’Callaghan. Invited to attend an exclusive wine tasting on Thursby’s private rail car, Frank takes along his secretary-come-lover Vera Peregrino to complete his cover. Thursby entices his guests with the promise of a taste of a rare California wine: the Ravensridge Blackbird Noir.
All does not go to plan, though, when General Thursby is murdered before the wine tasting has even begun. Frank is caught up in the allure of his former lover, Cicilia, who also happens to be the dead Rusty O’Callaghan’s widow. Locked into the private carriage until the passengers reach their destination, the guests proceed to pull some corks and theorize who among them could be the killer.
When Vera is arrested for Thursby’s murder, Frank must change his perceptions and find the real killer, or lose both Cici and Vera . . . and maybe even his life.
White with Fish, Red with Murder will be available for pre-order soon.
Stay tuned!

Harley Mazuk was born in Cleveland, the last year the Indians won the world series. After growing up in Shaker Heights, he attended Hiram College and spent his junior year at Elphinstone College, Bombay University. His B.A. is in English lit, and now that he’s gainfully retired from work, he’s a full-time writer. Harley, his wife, and two children live in Maryland. His passions are writing, reading, and he shares his character P.I. Frank Swiver’s love of California wine.
Find Harley at: www.harleymazuk.com

Amazon Associates Support. Bookmark and use when you shop @ Amazon.